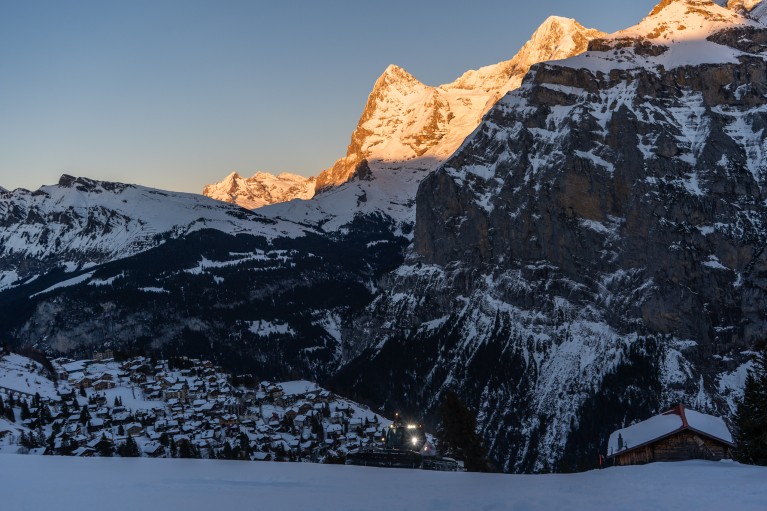 Working in the
loneliness of the night

OUT AND ABOUT WITH – Yanick Wyss, snow groomer Mürren-Schilthorn
Mürren 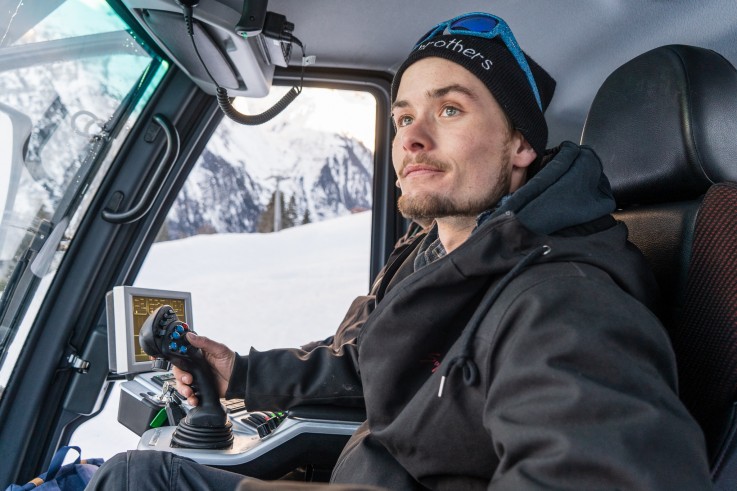 They are the heroes of the night, the snow groomers. We have them to thank for the perfectly groomed slopes of the Jungfrau Region.

Lights on the mountain, tirelessly on the move. Up and down, and up and down again. This is the image I have of snow groomers. I only know them from a distance. That is about to change today.


It's 3 pm, I'm driving from Interlaken to Stechelberg. Against the current. Car after car comes towards me. Many of those who were on the road today in Grindelwald, Wengen or Mürren are already on their way home. Not so Yanick Wyss, whom I meet at the valley station of the Schilthorn cable car. On the contrary. When the others call it a day, his working day begins. The 24-year-old from Wilderswil is a snow groomer. 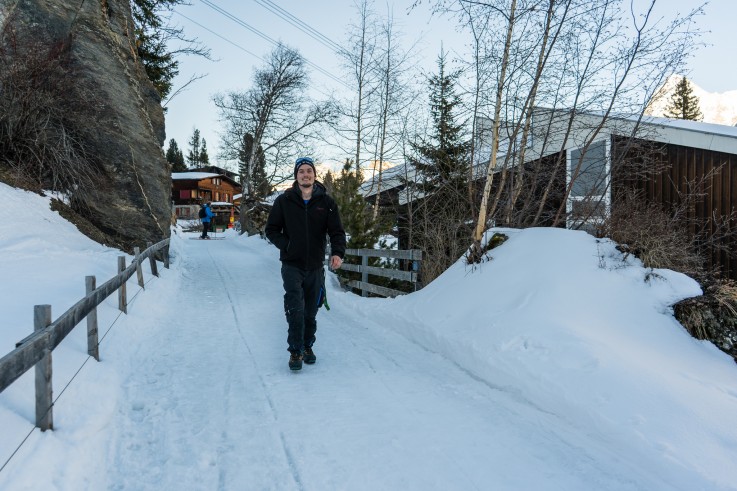 Yanick Wyss on his way to the garage 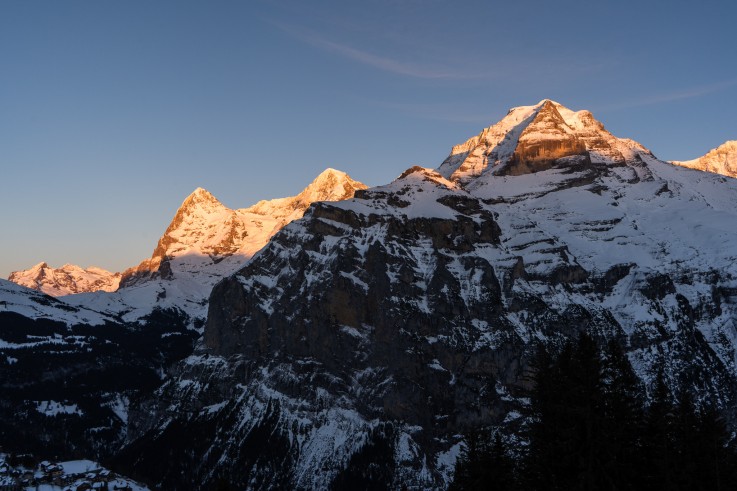 Together we take the Schilthorn cable car via Gimmelwald up to Mürren. Here the snow groomers gather before their shift, drink a coffee together. They exchange information. The newcomers receive important tips. Yanick Wyss is not one of them. This is already his third season as a snow groomer in the Mürren-Schilthorn ski area. I learn that today we are on the way in the Gimmeln-Schiltgrat region. With the Leitwolf, the big machine that has a winch. «That's my favourite thing to work with» says Yanick Wyss, but he is also regularly on the road with smaller snow groomers. He is even sometimes involved in the preparation of the snow park. «At the Gimmeln ski lift, the lift track is uneven» he learns shortly before starting work and promises to take a close look. 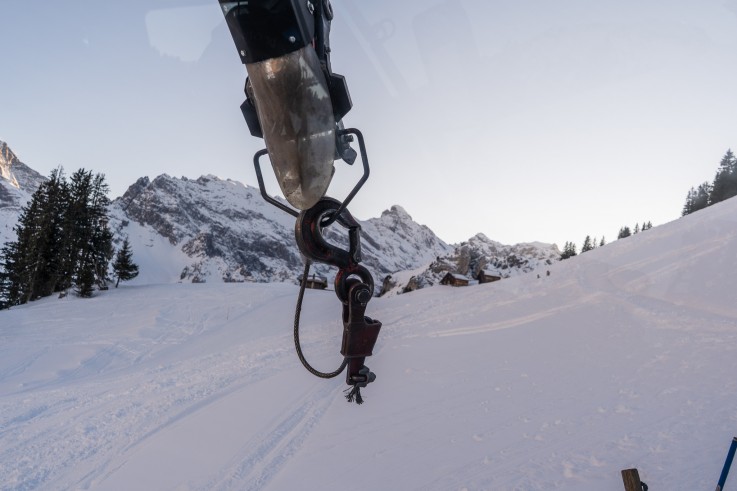 In order to put the winch into operation... 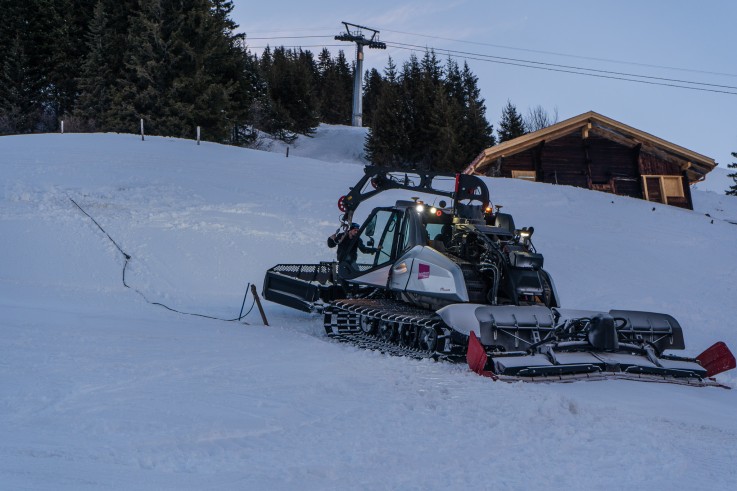 ...Yanick Wyss has to get out of the car.

It's 5 pm, the lifts have not been in operation for half an hour. The slopes are empty. We're ready to go. I take a seat next to Yanick Wyss. He starts the engine, the system starts up. He sets the heating to 23 degrees. «I'd rather have it too warm than too cold.» Then the nine-metre-long, five-metre-wide, 12.4-tonne, 530-hp vehicle starts moving. With his left hand Yanick Wyss controls the caterpillars, his right hand is on a kind of joystick with which he operates the plough, the shovel at the front. A screen in front of him, a lot of buttons - I would be overwhelmed. «It's easier than it looks» says Yanick Wyss. He didn't have to do any training. «The car test is enough». A lot of it is learning by doing. «The fact that I am practised in handling large machines has certainly helped.» Besides his job as a piste driver, he helps his father on the farm. In the summer he works temporarily on the construction site - and goes with his father's animals to the alpine pastures. In the near future, he would like to get his hunting licence. 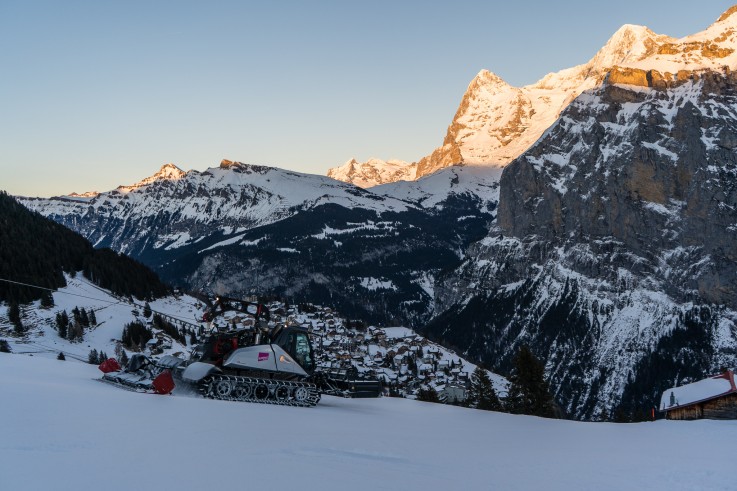 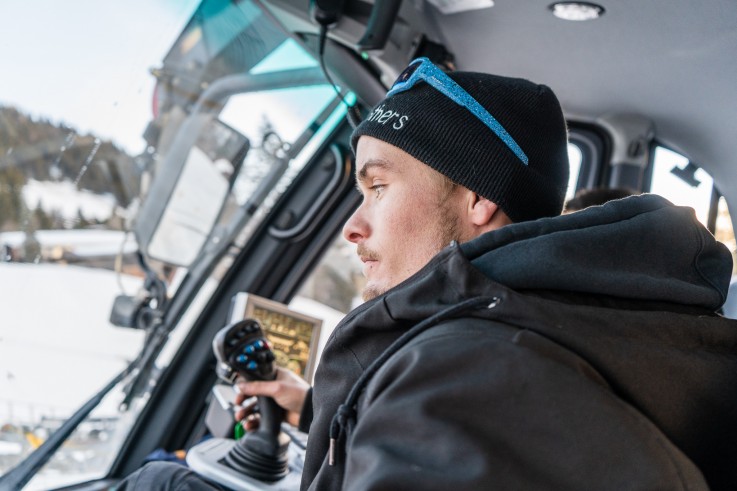 With the joystick Yanick Wyss operates the plow

«With my work I give people pleasure. That makes me happy.»

Working in front of a dream scenery

It's 6 p.m., the last rays of sunlight illuminate the snow-covered mountain peaks. The Eiger, Mönch and Jungfrau shine in the evening glow. Why do you think I'm asking Yanick Wyss now what he likes best about his job? «This atmosphere, this view» he answers unsurprisingly, but also, «With my work, I give people pleasure. That makes me happy.» Praise for a «perfectly groomed slope» is also the best reward for his night's work. 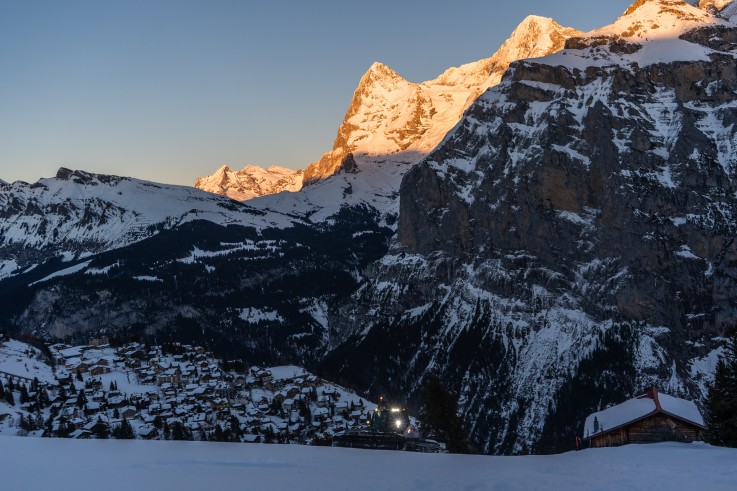 The triumvirate shines in the evening glow

We are always on the road at 13 to 16 kilometres per hour. Every now and then Yanick Wyss stops, gets out, hooks up the wire rope and starts the winch of the snow groomer. «So that we don't slip off in steep places.» The job doesn't seem all that harmless to me. «You just have to be on your game» Yanick Wyss puts it into perspective, «and react correctly in dicey situations.» The first time he slipped without a winch, he was briefly afraid. In the meantime, however, nothing can shake him out of his calm any more. A short time later, the screen shows a gradient of over 60 per cent as we descend attached to the winch. I let slip a «Pretty steep». In response I get a «That's nothing yet.» When Yanick Wyss uses the winch, he sets up a warning triangle. «It happens again and again that skiers or people on sledges are still out at night, often slightly drunk. If they don't see the wire rope or if it gets caught somewhere and then rushes across the slope. Then it becomes life-threatening.» 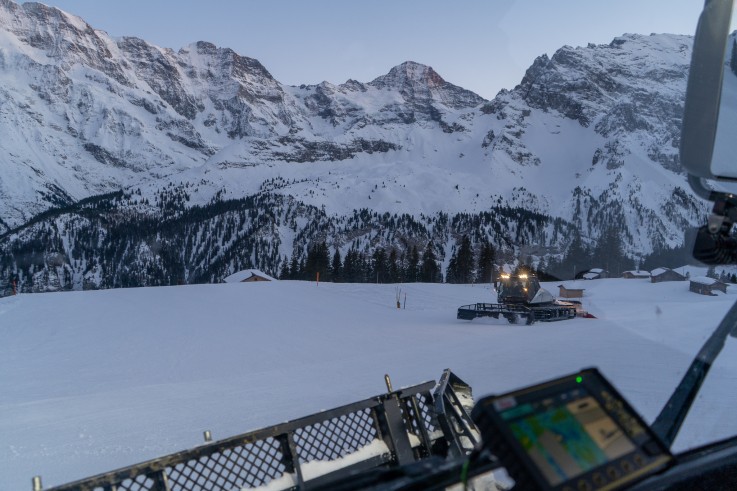 A colleague crosses the track 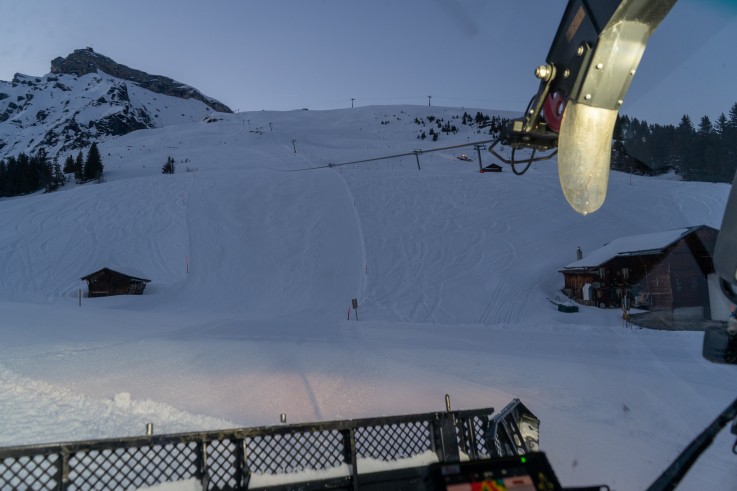 When it is steep only with winch

Again and again, Yanick Wyss shovels back up snow that the skiers have slid down during the course of the day. Or to put it in the words of Wikipedia: «The snow groomer pushes snow in front of it and thus levels out unevenness in the ground. At the same time, the snow is compacted by the weight of the vehicle and «dug over» and levelled with the trailing tiller. This ensures a durable ski slope over a longer period of time.» But back to Yanick Wyss: on the screen he can see how much snow lies beneath him. «Still over a metre, that looks good.» He prepares the piste almost to the centimetre. «No, I'm not a perfectionist» he says. I don't buy it.


It's 8 pm. Most of the snow groomers meet for dinner. Yanick Wyss continues to work. He slips a snus pouch under his upper lip and says, «That's my supper». He doesn't even want to leave the solitude of the night. He prefers to seek out the uneven track near the Gimmeln ski lift - and straighten it out. 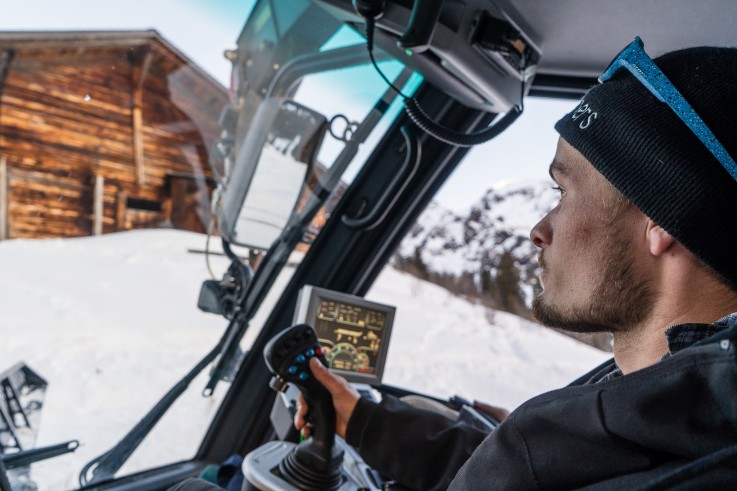 The «perfectionist» at work 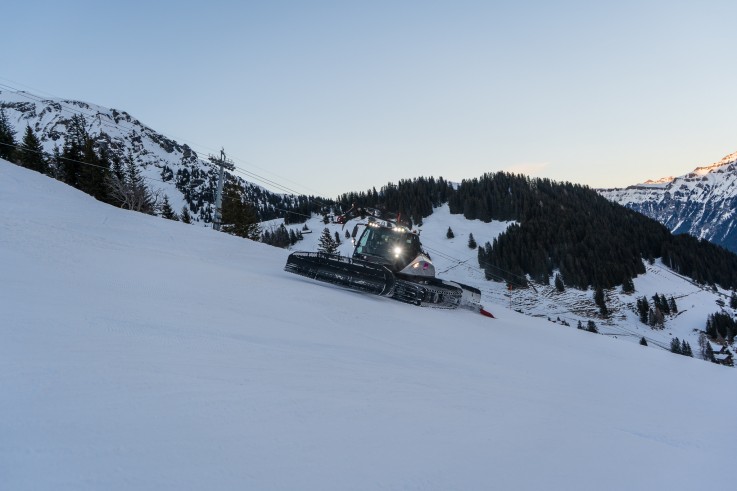 Tirelessly up and down

The night progresses. The conversations become more personal, more open. «I say what I think» says Yanick Wyss. He talks about his parents - and his twin brother. About the pranks they used to play. «Even today we look exactly the same.» He proudly shows off his cap, which says «White Brothers». «People know me as White now, it sounds much cooler than Wyss.» What stands out: whether on the piste vehicle in winter, on the alp in summer or watching ibexes with his brother. Yanick Wyss likes the solitude. «The main thing is no people» he says one or two times that night.


Yanick Wyss rarely has any passengers. Music, on the other hand, is a constant companion on his night tours. «I like listening to Örgeli music the most, which many people my age don't understand, but I grew up with it. And: Depending on my mood, I also like to listen to Linkin Park or Rammstein.» In the spotlight I catch sight of two glowing eyes about 100 metres away. «A fox» says Yanick Wyss. «Sometimes I see up to 15 in one night». Snow rabbits also cross his lane from time to time. 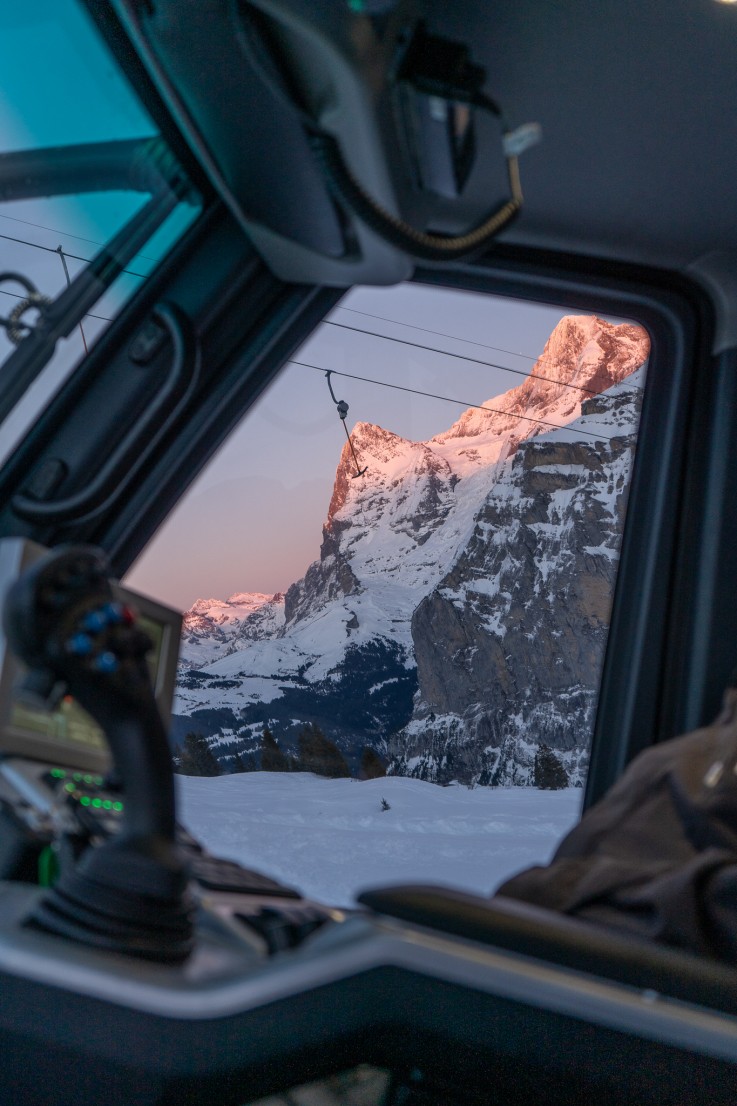 The view from the driver's cab 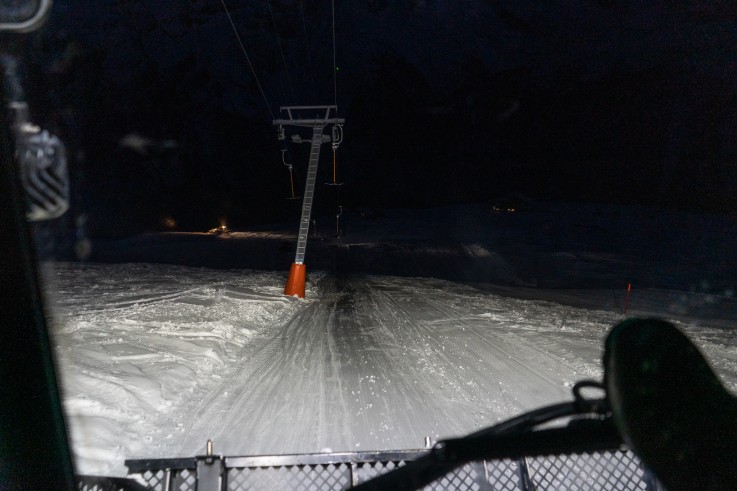 The slope in the headlights of the «Leitwolfs»

Luckily it's not me at the wheel

It is 9 p.m. I'm starting to get tired. There is something soothing about this steady, monotonous pace. We've reached the top of the Schiltgrad, at over 2100 meters above sea level. I have long since lost my bearings. «There's Birg» says Yanick Wyss, pointing to a light. On the other side of the valley, I catch sight of the headlights of the Grindelwald-Wengen snow groomers. Fortunately, it's not me at the wheel. «I'll do this traverse for a moment, then I'll put you back in Mürren.»


It's just before 10pm. I'm about to take the Schilthornbahn back to Stechelberg, while Yanick Wyss continues to make sure the slopes are perfectly groomed until about 2 a.m. «Get home safe» he calls after me, gets into the snow groomer and drives off. Soon only the taillights are visible before Yanick Wyss disappears again completely into the solitude of the night.

Up to the Schilthorn