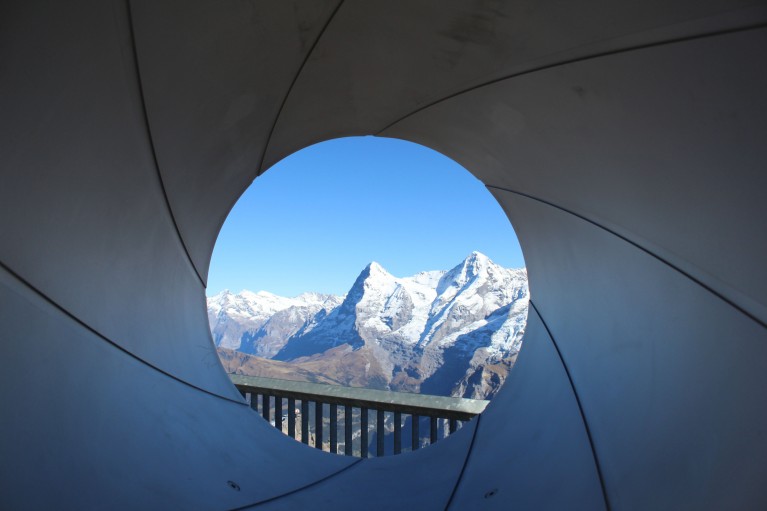 How a mountain becomes an icon.

FICTION – The PR agent on the Jungfrau Region's service.
Mürren 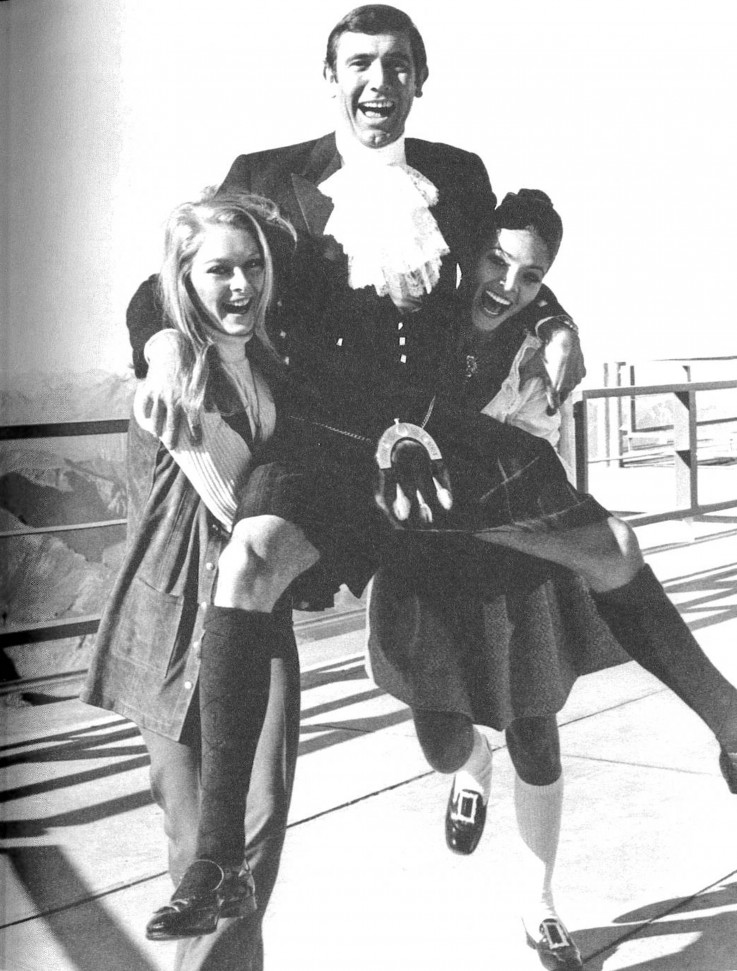 The best Bond of all times. «On Her Majesty's Secret Service» plays in 1969 on the Schilthorn in the rotating restaurant, which was named «Piz Gloria» as a result of the film. The name lives on today. The film shows several highlights of the region which can still be found today. Pursuits, fashion, villains, cocktails, beauties from all over the world and lovers wanting to marry are just some of the highlights awaiting adventurous Bond fans at the Schilthorn Piz Gloria.

«It's wonderful to be here again. In Mürren we filmed spectacular scenes, laughed a lot and had a lot of sex. It was the seventies.»

After all those years he's still standing there. On the Schilthorn. George Lazenby as James Bond 007. A selfie is an absolute must.

«On Her Majesty's Secret Service» is the Bond film with the most Bond girls of all time. Film stars such as Telly Savalas, Ilse Steppat and Diana Rigg were going in and out of Mürren's hotels for two months.
Even today we find international beauties on the Schilthorn, giving their acting talent all they have – simply to snap the perfect selfie. Entertainment pure. 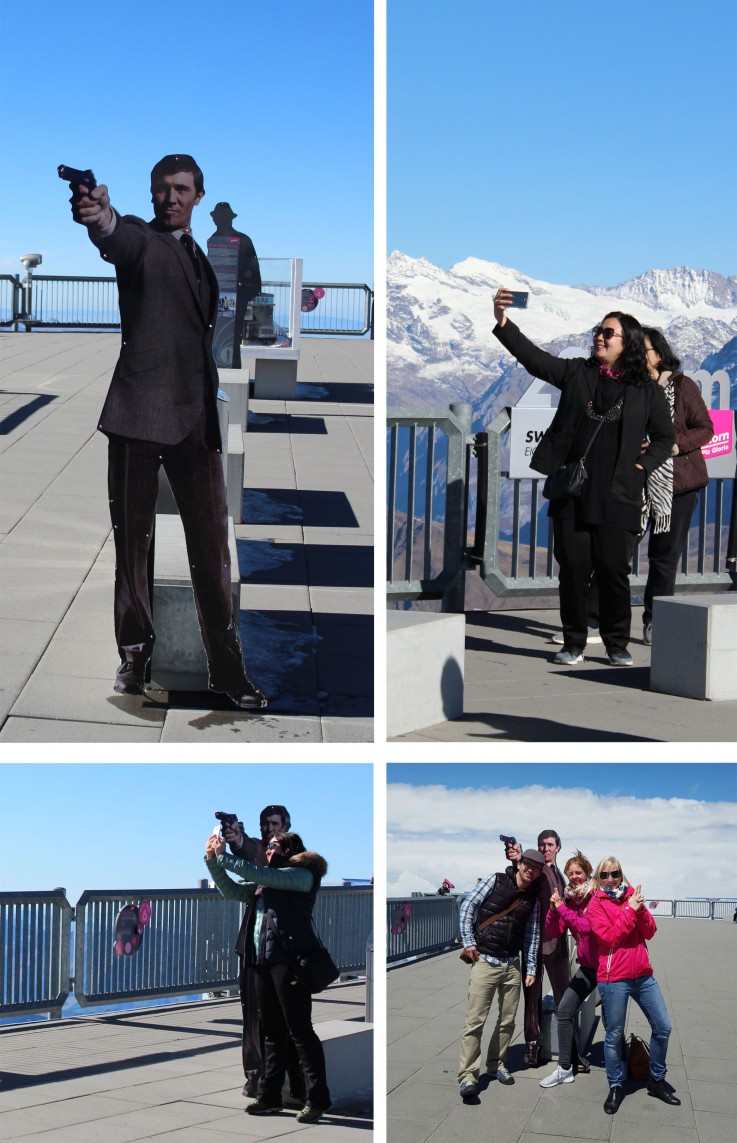 Already camouflaged and one with the telescope. All over the Schilthorn you can bump into «secret agents».

The rotating restaurant «Piz Gloria» is the obscure institute of the criminal Blofeld in the film.

In the main room, the scene is filmed where James Bond, as Sir Hilary Bray, eats with the Bond girls. Today, people are not just on the lookout for «beauties» (although that's all part of it too), their gaze is also captivated by the fantastic scenery. 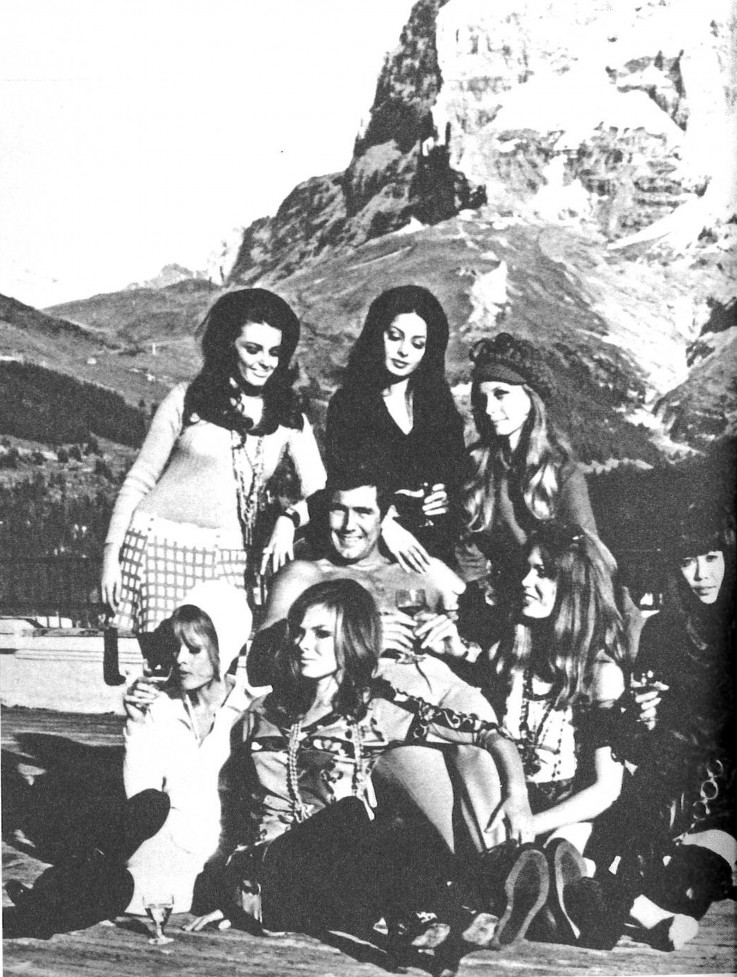 FACTS AND FIGURES
12
international beauties are kept under hypnosis on the Schilthorn by the baddie Blofeld. 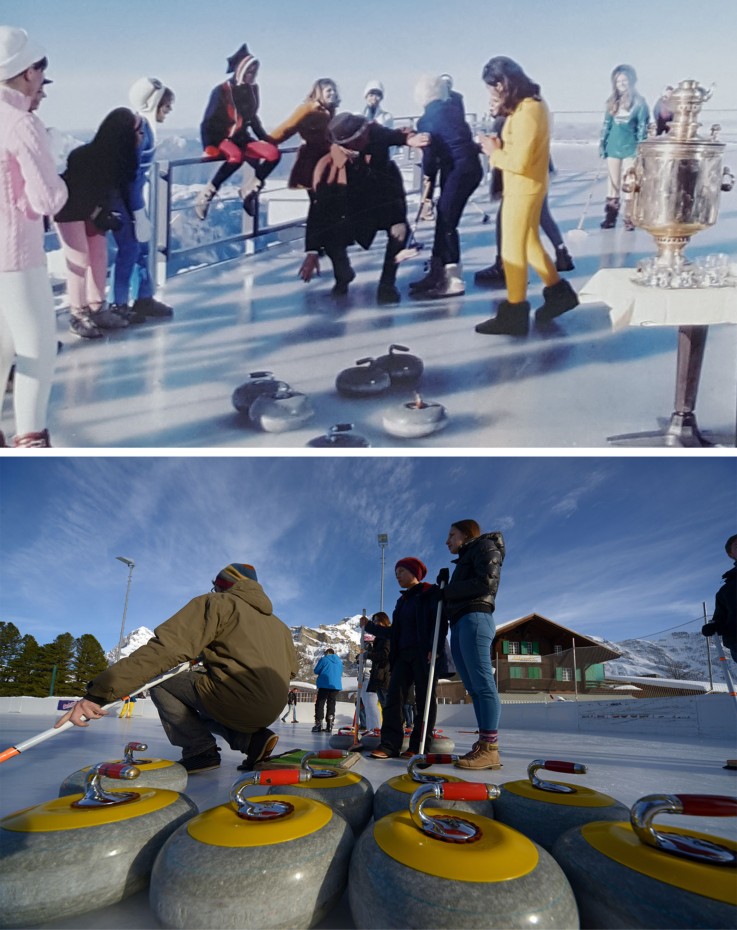 After five films with Sean Connery, the Australian George Lazenby slips into the role of the British secret agent.

What a shame. On the panorama terrace it's only James Bond who can play curling in the presence of numerous women (how could it be any different). For all non-agents there's a very nice ice rink in Mürren in front of the sports centre.

The panorama terrace in front of the rotating restaurant is temporarily being turned into a helicopter landing pad. Just like that. It's on this terrace that the famous curling scene takes place. The surface is specially iced over. 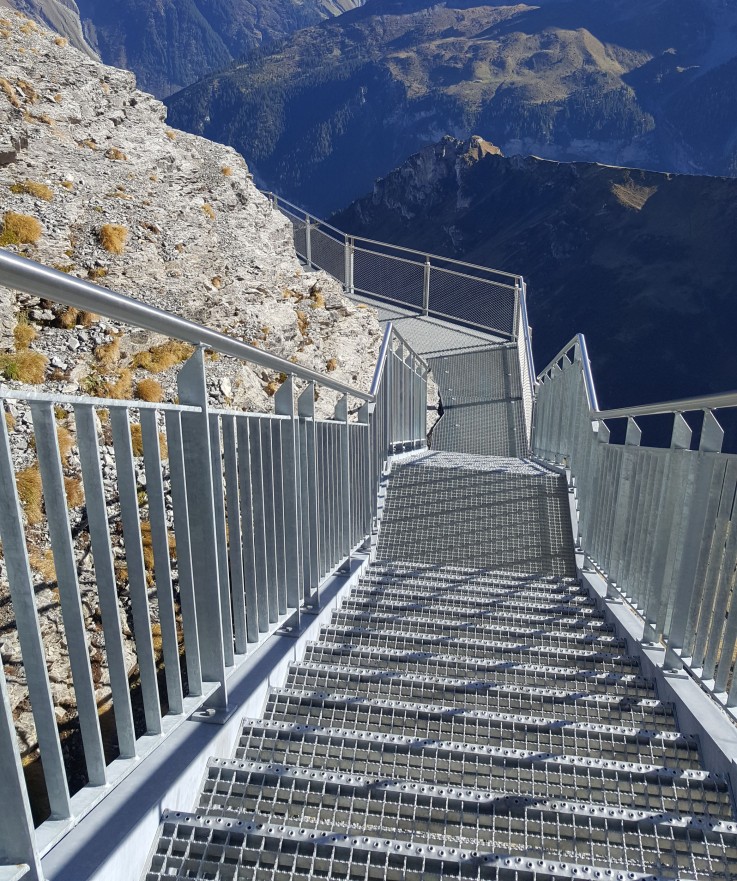 Training ground with a view. This is the entrance to the THRILL WALK. Agents in the making can test their suitability. The wheat will soon be separated from the chaff. 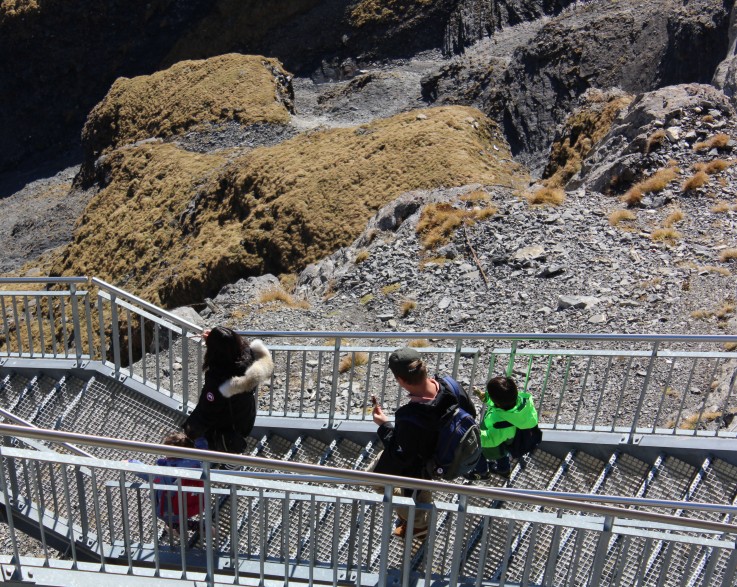 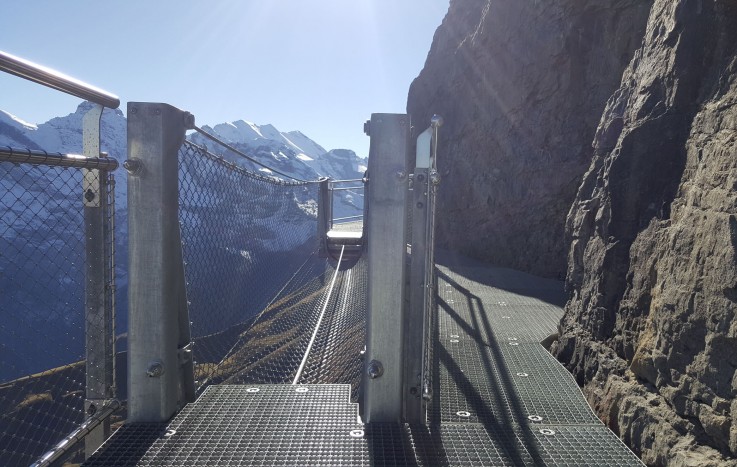 Left or right? For future agents there's only one answer. A little tip for semi-agents: don't look down... 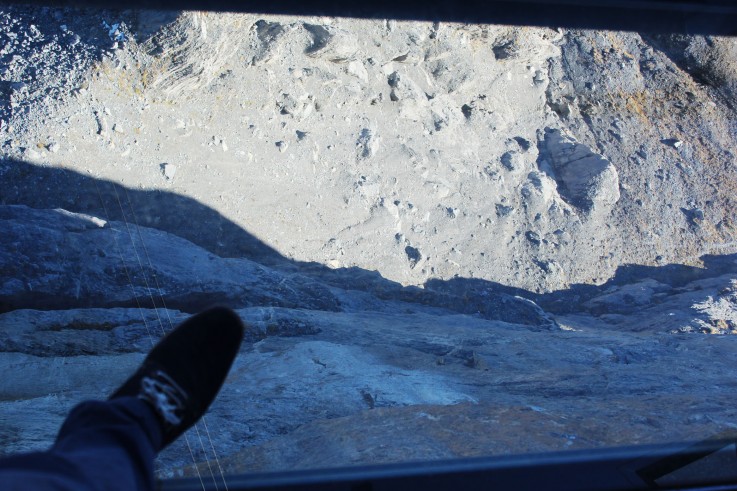 Only for the right agents

Those who survived the initiation test of the THRILL WALK can continue the training. The next challenge is waiting between the Lauterbrunnen Valley and Mürren – somewhere in between, in the middle of the rock face.

A highlight of the film is the chase with the acrobatic ski stunts. 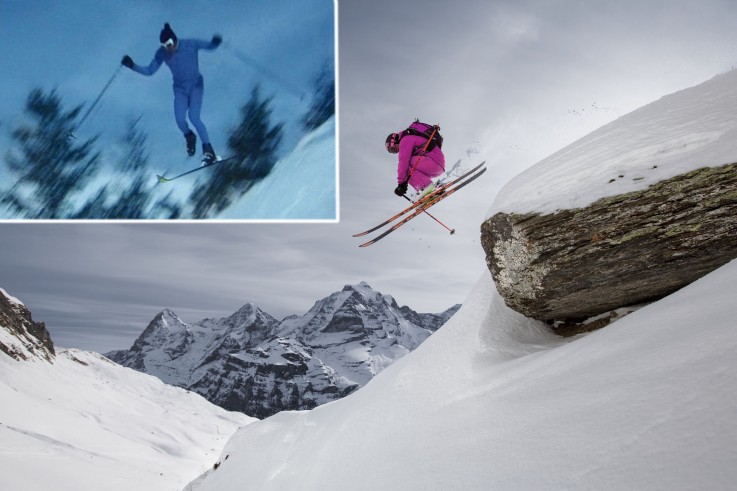 A trend forever. James Bond sets the standards as far as style is concerned. The fashion from back then still seems ubiquitous. The skiing techniques, on the other hand, have changed a little. 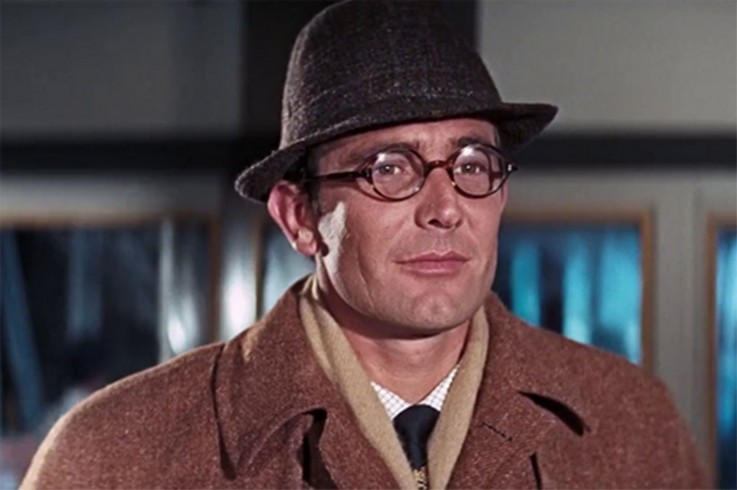 Not forgetting the hat. Every good agent knows that. The famous toss of the hat in Miss Moneypenny's office is just part of good training. And of course you'll be taught to be irresistibly cool.

Even the youngest are going along with the trend, sporting skin-tight all-in-ones. 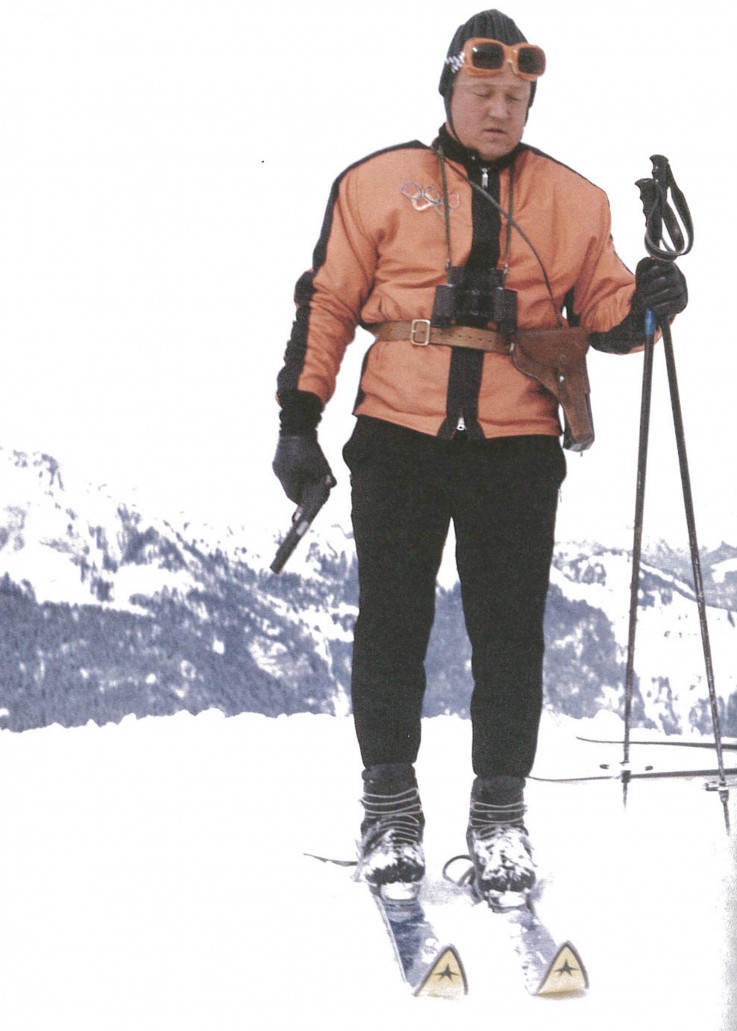 The hunt for the souvenirs has begun. Made in Switzerland of course. Belt, binoculars and holster originate from the Swiss army of course.

FACTS AND FIGURES
50
Swiss Franks is the wage an extra gets for their work per day.

On snow ploughs and dead sheep

That's crazy – and definitely wouldn't be done in this way today. The gruesome scene where one of James Bond's pursuers falls in front of a snow plough is very complex to film. The conditions are obvious: the pursuer has to die in a brutal way – but how is something like this done? Quite simple: The stuntman falls skillfully in front of the snow plough, which luckily knows how to stop with great precision. Then, a doll is positioned in the snow, a bit of red colouring poured onto it of course and – how could it be any different – a dead sheep laid next to it. Voilà. Seconds later it's raining red out of the spout of the plough. 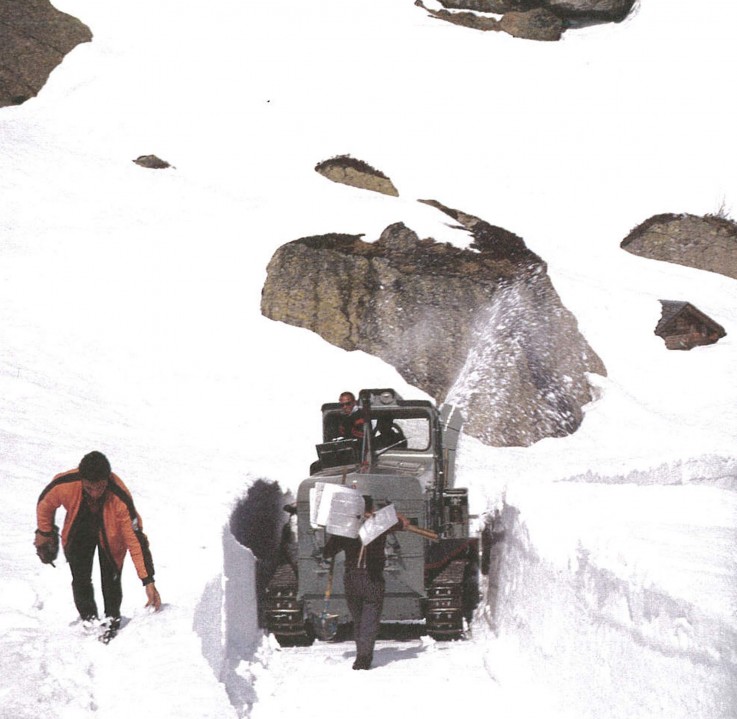 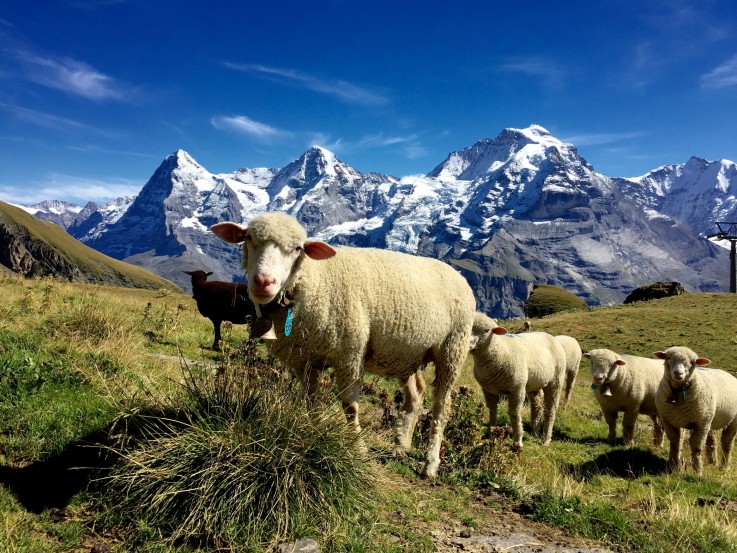 Sheep are much more charming like this. Posing in front of the Eiger, Mönch and Jungfrau – instead of dead in a snow plough.

Alcohol is free. Clever. If there are no problems, i'll eat my hat.

With some extras and stuntmen, the Piz Gloria rotates all by itself. Like a carousel. It's the alcohol. Because there's enough of it, and it's free. This incident is obviously thanks to the generous alcohol give away. Taking the piste machine for a little spin in the night is fun. It's just stupid that a tiresome glacier crevice is in the way – and that the piste machine does exactly fit in. Oh well, it's not the end of the world. None of the tipsy stunt men is injured. Phew. 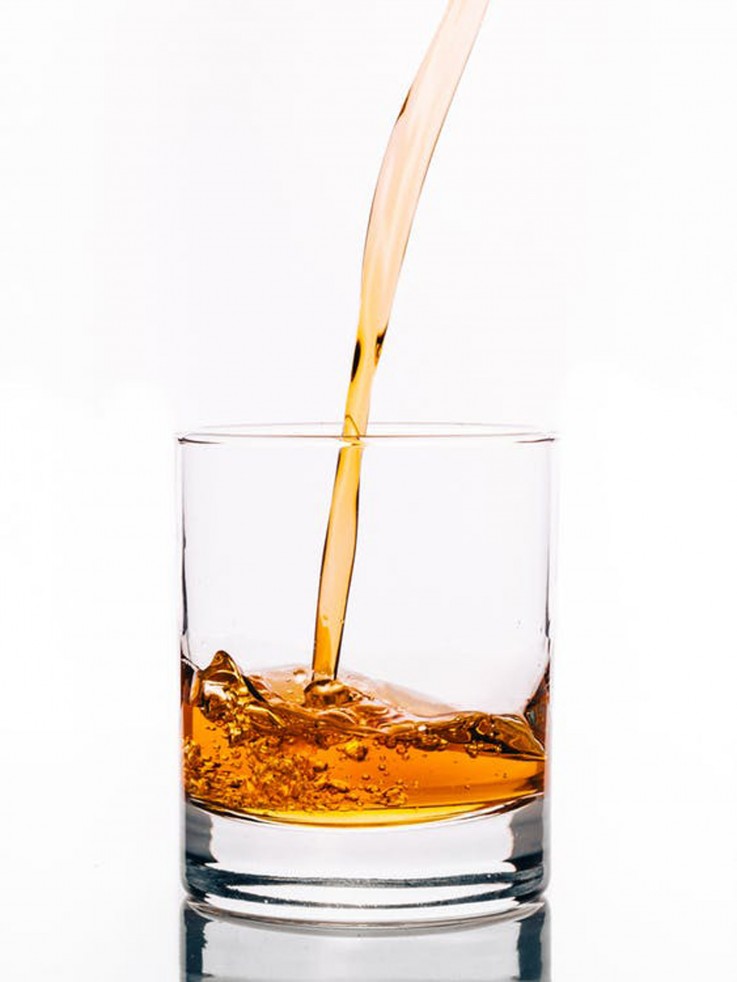 For the shooting of the bob scene, an out-of-use bob-sleigh run in Mürren which is still closed due to its dangerousness, was brought to life again. The two-man bobs are for riding and the four-man bobs are used for the cameras. 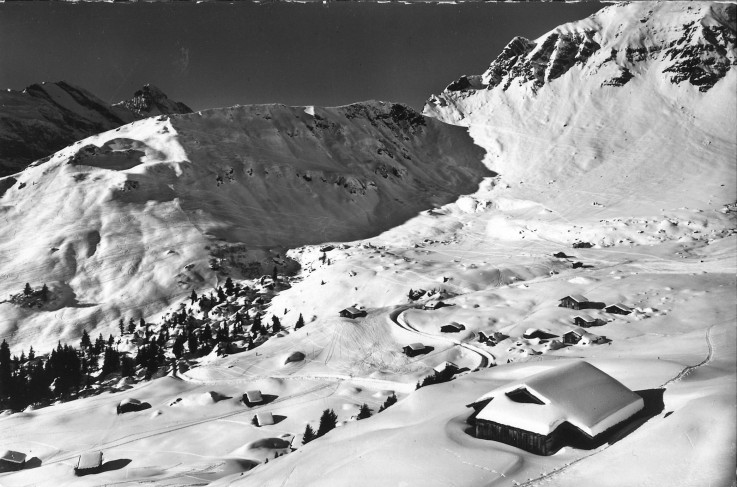 Today there are lovely toboggan runs such as the «Bob Run» or «Apollo».

The bob stunts are some of the most dangerous shoots in the film.

The «Bob Run» is part of the shoot for the James Bond classic. The original bob-sleigh run doesn't exist anymore – it was just a little too dangerous.
The stunts weren't given the go ahead in the end, for insurance reasons.

«We have all the time in the world.»

The Piz Gloria is destroyed. The baddie has been catapulted out of the bob-sleigh. Then – completely unexpectedly – something extraordinary happens: The agent gets married. The beautiful and clever Contessa Teresa «Tracy» di Vincenzo becomes Mrs James Bond. But the happiness doesn't last long: Tracy is shot by Irma Bunt, Blofeld is driving the lethal car – so he survived. It is said that Lazenby cried real tears during the scene. There's no question about it, the scene has to be shot again. James Bond doesn't cry. 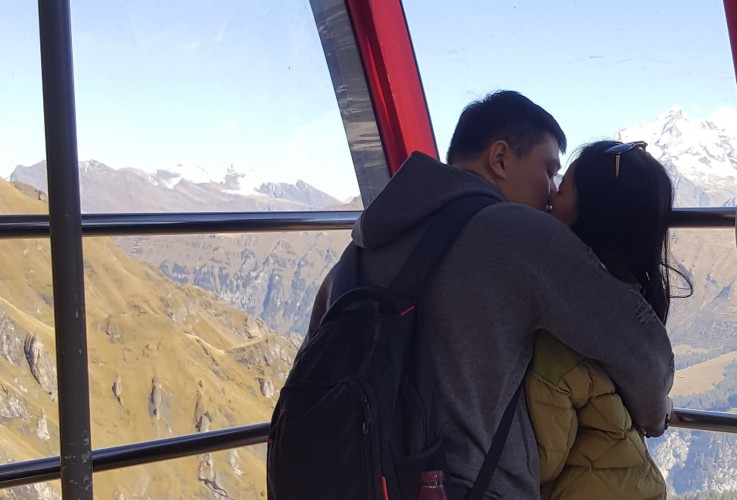 I wonder whether this couple is looking for the legendary James Bond cabin, where he purred «Will you marry me?» 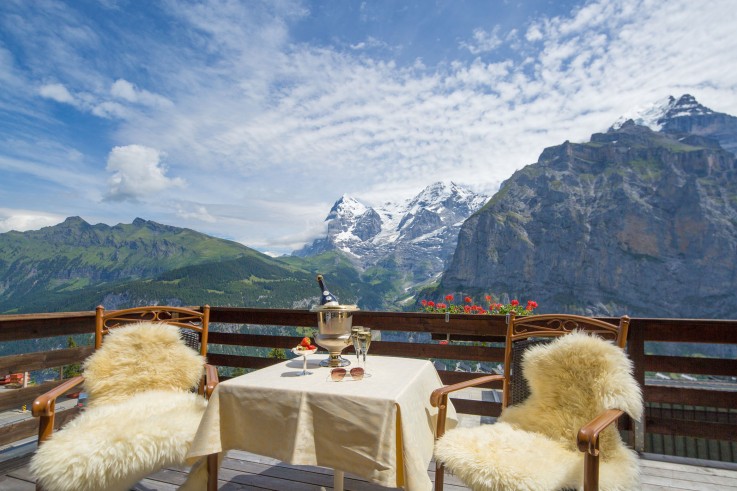 The best spots to say «Yes, I will»: in a hotel with a magical view in Mürren... 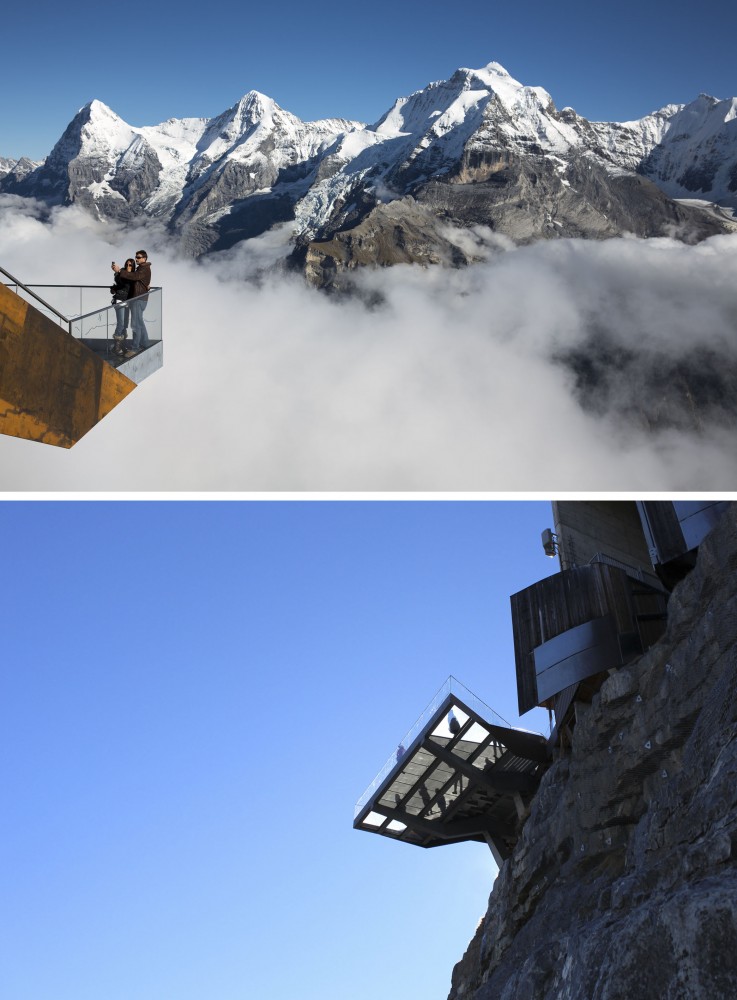 ...or outlandishly on the SKYLINE WALK at the Birg intermediate station.

FACTS AND FIGURES
25
million US dollars is what the sixth James Bond film made at the box office. It got mixed reviews from the critics. But for many fans it's the best Bond film that was ever on the big screen – and partly because of the spectacular stunts.

We'll see where the journey goes. But a real agent will keep coming back. Maybe a hobby agent on the SKYLINE WALK is practising the smooth delivery of the words: will you marry me?

The Jungfrau Region tells its story: 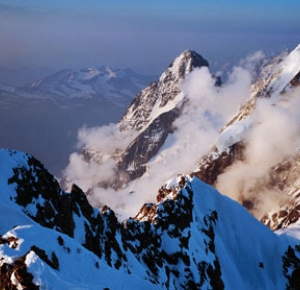 The christening of the trio. 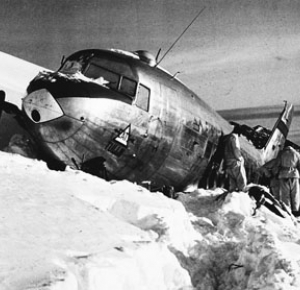 History defrosts itself at the Gauli Glacier. 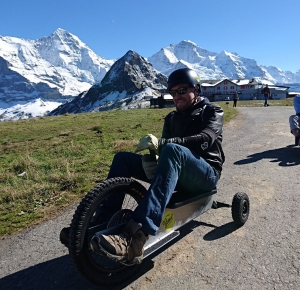 On your gemel! Get set! Go!